Leaving the canyon behind, the three set off at a trot, Ger in front, Snack close at his heels, Yuki in the rear. Heading west across a sandy plain, the sun quickly sunk into the horizon ahead. 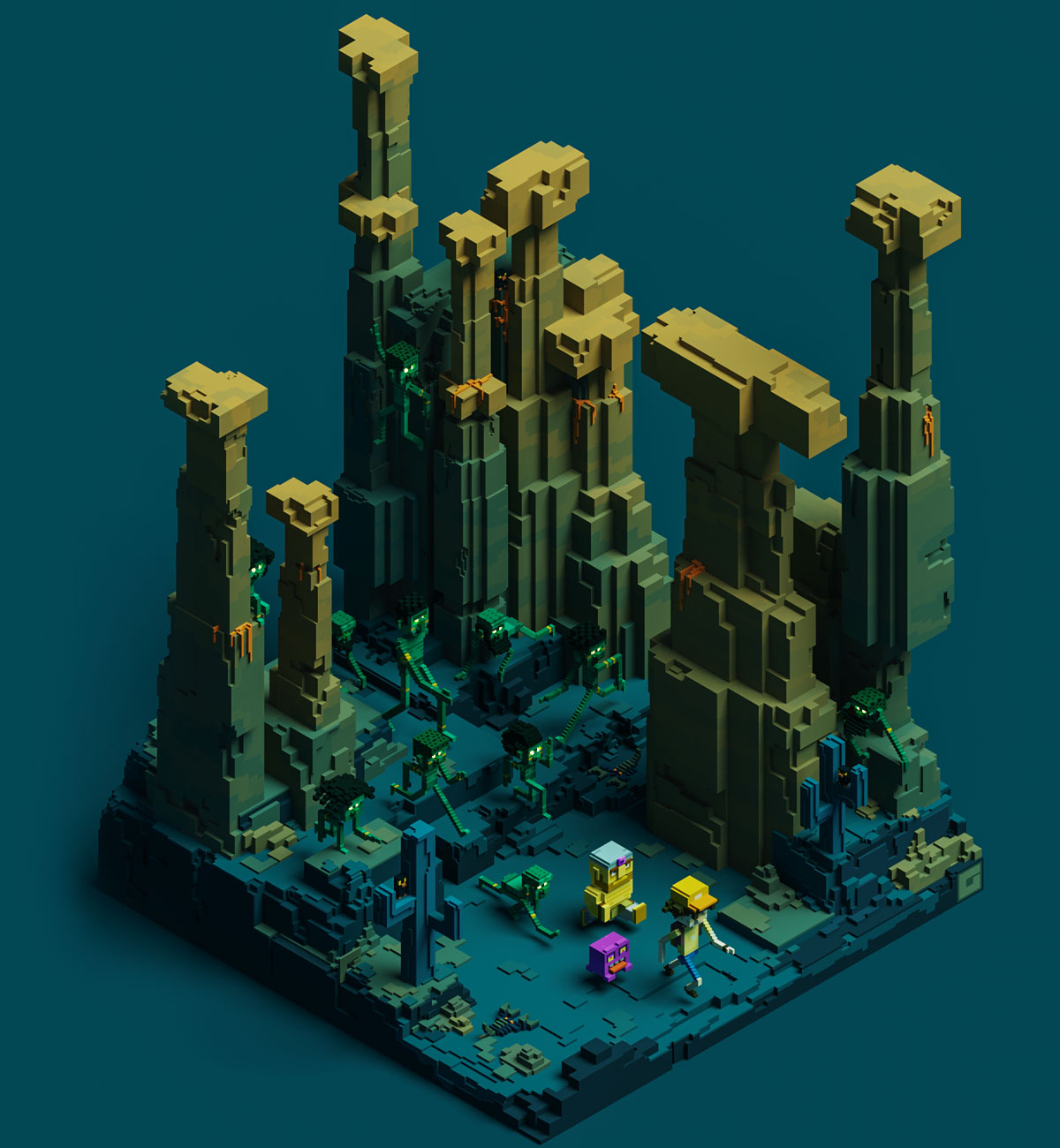 Once the light of the day had faded, the terrain remained softly illuminated. Yuki’s attention shifted upward to waves of yellow and green energy stretching across the heavens.

Yuki heard his father’s voice in his mind, “When solar winds hit earth’s atmosphere, the energy glows at the poles. It’s called the aurora. We’ll go and see it for ourselves one day.”

Remembering his father’s words, Yuki felt a deep sorrow. He hoped his father was still alive. If he had been killed, surely Yuki would have felt it?

“We should reach the grasslands shortly before sunrise,” Ger called back over his shoulder. “Snack and I must return quickly; the higher the sun, the harder it will be.”

Yuki felt grateful to have Ger as his guide. “Thank you,” he called ahead to Ger.

Ger didn’t reply. In the beginning the thought of handing Yuki over to the Gesu had crossed his mind. He may have been punished or outcast for having harboured the human, but deep down he admitted he hadn’t given Yuki up because he felt sorry for him. All the stories he’d been told about human visitors by his elders didn’t correlate with the one with him now.

Time passed. Fires could be seen burning in the distance to the north, for what reason they could only guess. Yuki became aware of a silhouette ahead; a tall obelisk that cut into the sky. Ger made directly for it, and once reaching it they stopped at its base to rest. 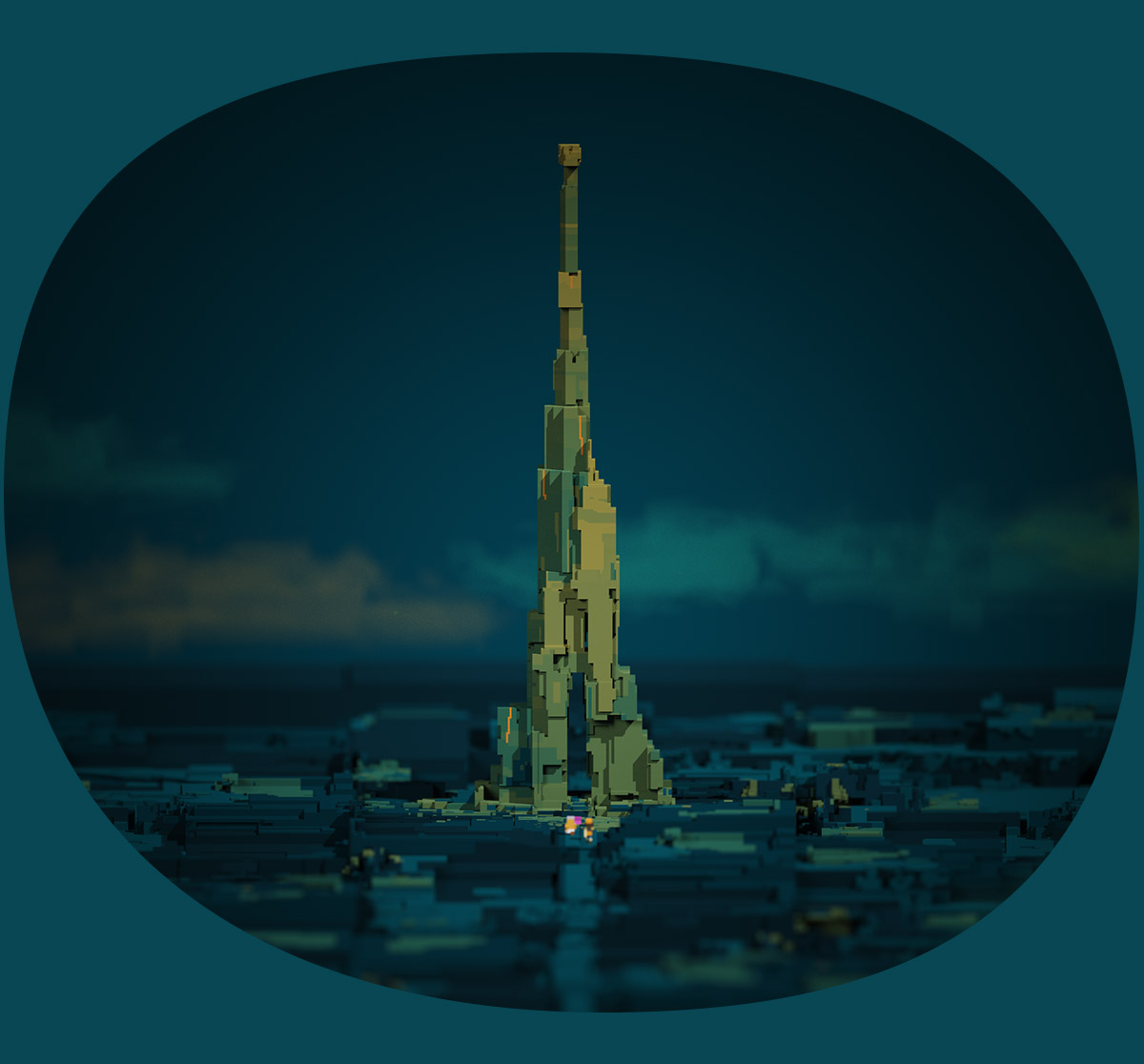 “We are halfway. From here on the chances of crossing with the gabba are high.” Ger handed Yuki some water from a skin, then a small block of food that tasted sweet. Returning the skin of water, Ger poured some of it onto a stone for the Snack, who lapped it up.

“If we’re lucky, they’ll just take our provisions,” said Ger. “They can be violent, but the gabba are more wild than evil. This war the gesu spoke of makes no sense to me.”

“Do they eat people?” asked Yuki.

Yuki felt nerves creep into his stomach. In his daydreams he was invincible, but in reality he doubted himself. He was still afraid of the dark. He watched Snack lick a rock and tried to change the subject.

“Where did you find it?”

“These ghouls dwell beneath the rock in caves. Usually in numbers, but when I found this one he was all alone. We’ve stuck together ever since.” He thought for a moment, looking up at the stars. “I don’t mind being alone out here, but in truth I’d be lost without him.” He dropped his gaze and watched as Snack sniffed the ground. “In many ways he is better than us. He does not judge. He does not betray.”

Seemingly oblivious to the conversation, Snack lifted its leg and peed on a rock.

After a moment’s silence, Ger stood. “It’s time to go.”

With the obelisk behind them, Yuki noticed a subtle change in the landscape. Rocks and thickets gave way to desert grass and shrubs.

Something had bothered Snack, who now moved closer to Ger. Ger looked back to Yuki, “Stay close, be quiet, keep moving,” he ordered in a low voice.

A horde of wiry bodies swept deftly over the plain. Moving soundlessly around debris, swinging their bodies over rocks with one hand, weapons in the other. Tufts of thick black hair bobbed as the creatures navigated the dark.

The aurora illuminated yellow stripes painted across their pale green skin; it shone in wild eyes set in deep sockets.

A lookout had caught sight of three walkers resting at the tower and alerted the camp. The elders sat in a circle, giving their blessing as the rest of the horde set off on the chase.

Yuki felt his legs turning rubbery and numb, his mind groggy. They had been traveling for hours. He sensed something move in his peripheral vision; heard whispers on the wind. Perhaps Ger had also noticed, he wondered, as the oman had increased his pace. He guessed dawn was not too far away; surely they were close. The change in landscape had brought hope they’d crossed safely, but the fear of an ambush remained.

Yuki was startled as something clattered at his feet, then again, and again, pattering around them like the beginning of a heavy rain. One hit his back, then his leg. They were stones.

A pebble hit Yuki in the back of the head. He gasped but kept moving. In the gloom around them he now saw the horde, matching their pace. Silent, they moved like liquid in the darkness, flowing around the rocks and shrubs.

A net sailed through the darkness and snared Snack, who tumbled and yelped. Ger and Yuki ground to a halt.

“Snack!” Ger exclaimed. He leaped for the net but it disappeared as it was dragged away into the darkness.

A mob of gabbas jumped atop Ger, leaping onto his back, they tried to pull him down.

Yuki tripped across a spear as he stepped back, tumbling onto his backside. A gabba stood over him, holding the spear to his nose. Several figures closed in around him, their wiry hands searched his body and pulled at his backpack in silence.

“Snack!” cried Ger. Snack’s yelps grew fainter as it disappeared into the night.

With all his might Ger roared. He swung his bulky frame in a circle, sending his captors flying to the ground. A gabba leapt onto Ger’s back and sunk its teeth into his shoulder. Reaching to his turban Ger tore the pink glass free and threw it to his feet. Picking up a boulder with all his might, he lifted it above his head and stepped over the jewel.

“Close your eyes!” he yelled. 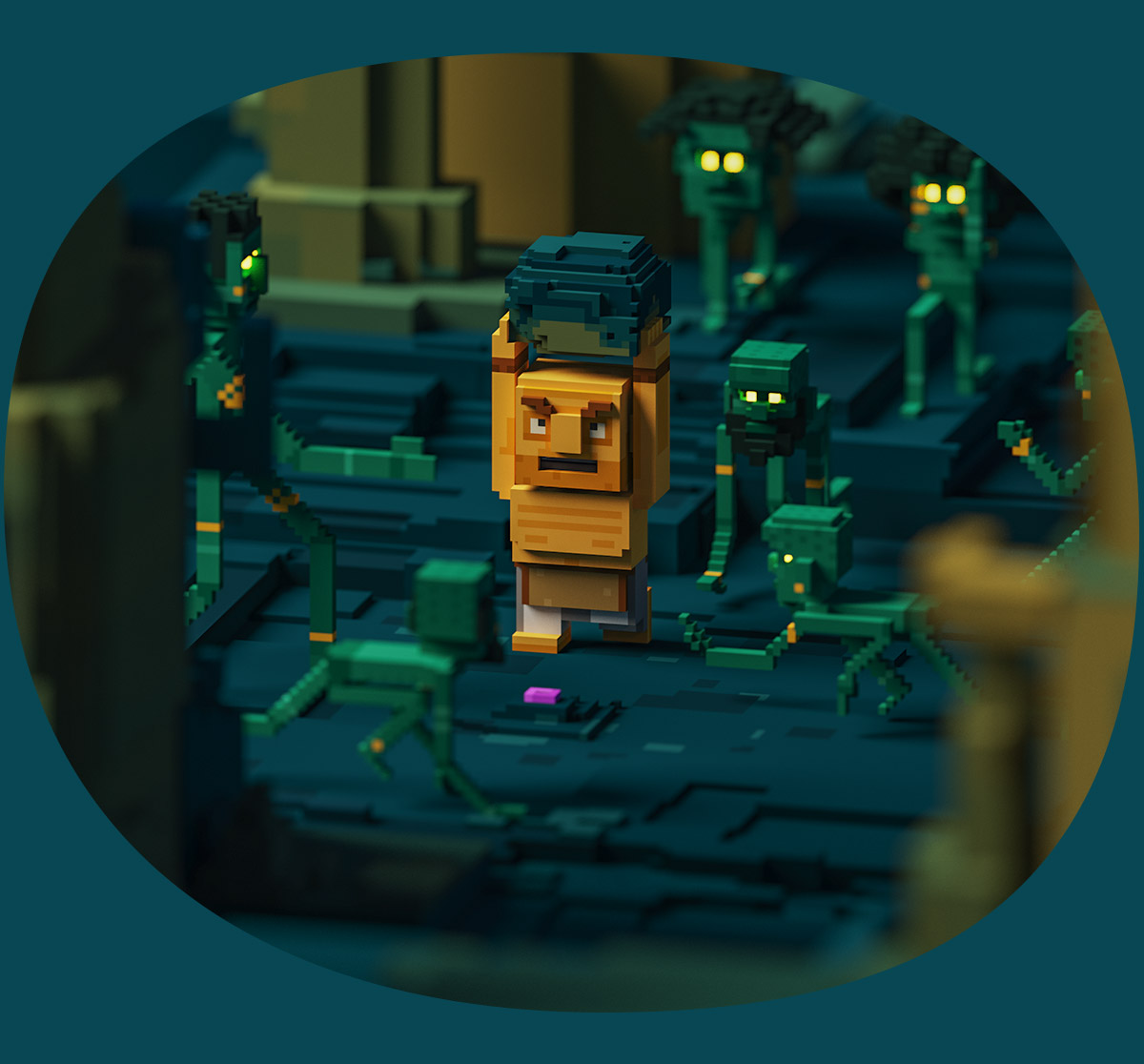 Yuki turned his head away as Ger brought the stone down with all his might. Wth a sonic boom the night turned white as a fierce glow bloomed from the source of impact. A shockwave rippled out, knocking the horde to the ground in a wave. In its wake a chime pealed through the air, ringing in their ears.

The gabbas squealed and scurried, climbing over themselves to escape. Yuki sat up, disorientated. Ger stumbled dizzily where he stood, trying to regain his balance.

Moments passed. Yuki slowly stood. Ger spun in his place, straining to see into the gloom.

The sound of scampering feet approached. It was Snack. With a yap he bounded up to Ger, jumping into his arms.

“Snack!” exclaimed Ger as he caught his companion and hugged him. Snack licked his face.

“What was that?” asked Yuki in a daze. Ger’s turban lay on the ground, the pink stone shattered, the boulder he’d used split in two.

“That is why omans rule the Sabassa,” Ger replied. Composing himself, he released Snack to the ground, “but they will return. We must go.” He picked up his turban and wrapped it around his head.

The horizon to the east had tinged orange and blue. Dawn was approaching.

As they turned to the west a horn rang out across the plain. A rumble reverberated beneath their feet. Yuki strained to see into the gloom, fearing the gabba had already returned.

A glowing orb pierced the dark from the west and sprung into the heavens, arcing through the sky and landing with a whoosh into the space between where Yuki and Ger stood. The shaft of a feathered arrow protruded from the ground, its head burning white in the baked earth.

The pounding on the ground grew louder until a pack of beasts with riders came to a halt around them. The beasts were fogdors, powerful four-legged creatures with tufts of whiskers sprouting from their brows and broad noses. They padded restlessly at the ground with their paws. Sitting atop the beasts were the chittos, proud faced ghouls with thin, wide eyes and leathery faces. Patterns of vermillion and blue tattooed their bodies. They had their bows drawn and pointed at Yuki and Ger.

“It’s an oman,” reported one of the chittos cautiously.

“A human!” A murmur of whispers spread through the group.

“Stop!” commanded another. The chitto lowered their bows.

The sound of the voice surprised Yuki. The chittos pulled aside their fogdors to let the commander through.

Yuki peered through the gloom. A figure small in stature and light in frame stepped through and stood in front of them. A mask of carved wood covering its face, dark hair billowing out around it. 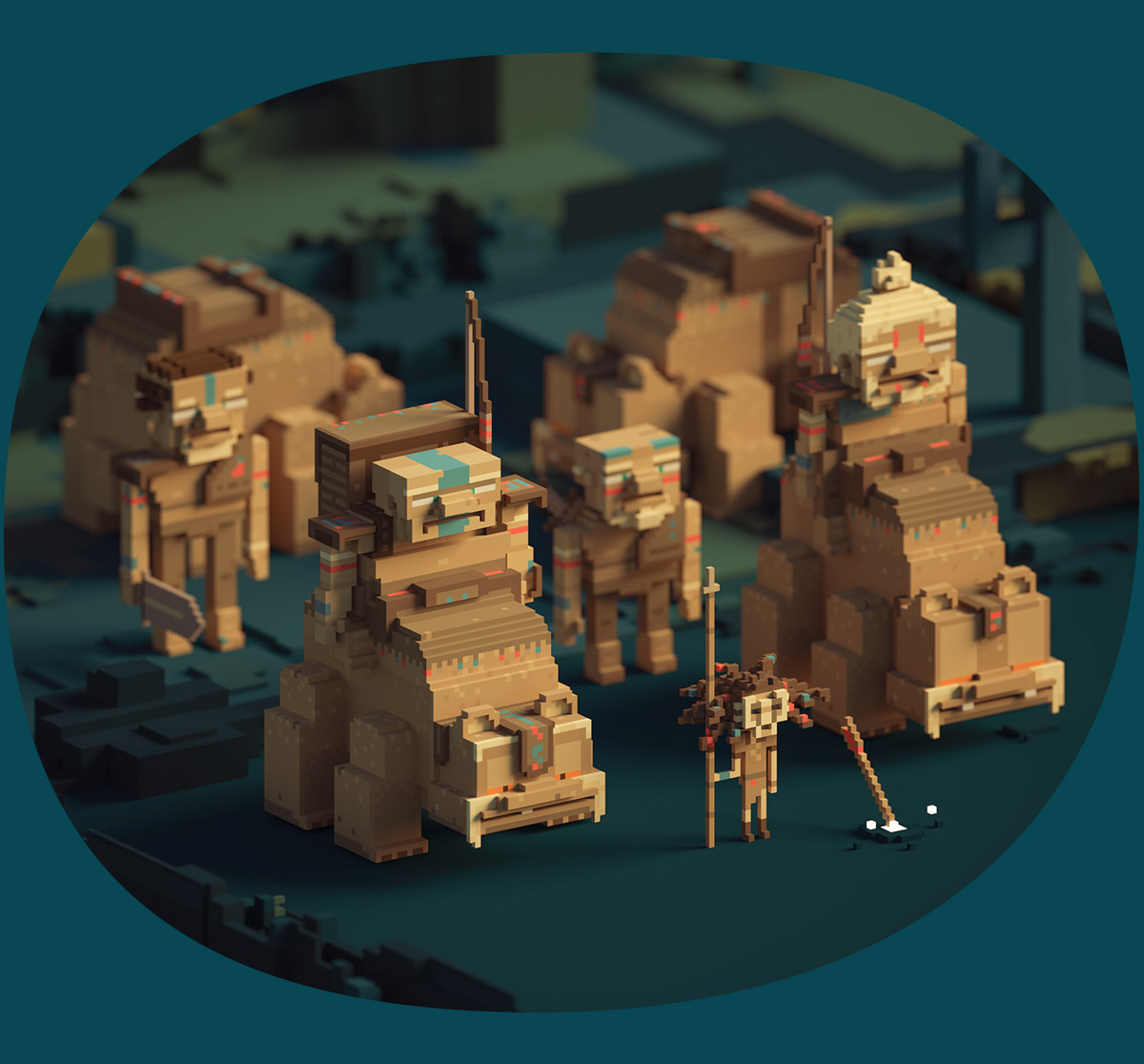 “Great chitto!” Ger addressed the commander, “we mean no trouble.”

“Ha!” shot the masked face, “Yet you bring an army of gabbas and your strange magic.”

Ger deferred. “I mean no offence chitto. This human wishes to return to his world.”

The chitto with the mask paced back and forth in front of Yuki, examining him carefully.

“We will take the human, oman,” said the leader, “leave us.”

Ger looked at Yuki and nodded, indicating he should go. Yuki hesitated; was this goodbye? Yuki wanted to hug the pair, but held back.

“Good luck,” said Ger. Before turning away he stopped, “Use your beak,” he said, tapping at his temple with a smile.

“Use your beak,” smiled Yuki.

Yuki knelt and gave Snack a scratch behind the ear. “Thanks little friend.” Snack reciprocated by licking his face.

Ger waved him away. “This is the Sabassa, and I am an oman. Go.”

A large chitto moved his fogdor alongside Yuki and lowered a hand. Yuki accepted and was pulled up onto its back. Another pulled the arrow from the ground and sheathed it, extinguishing its light. The masked chitto mounted its own fogdor and turned in the direction of the Grasslands.

Yuki looked back, Ger and Snack were already jogging east, silhouettes against daybreak.

“Boy!” called the leader, “hold tight.” Yuki gripped his rider and turned. The leader had removed its mask and stared with brown eyes into his. Just as Yuki had suspected, the leader of the chittos was a human; a girl barely older than him. Before he had a chance to reply, she kicked the sides of her fogdor and the party broke into a gallop, cutting through a field of swaying grass.

NEXT UP: Chapter 4 ‘The Father’